Flats2Mountains, sharing a love of trail

Home/Latest News, News/Flats2Mountains, sharing a love of trail
Previous Next

Flats2Mountains, sharing a love of trail

A group of friends, trail runners from the Cape Flats, have started an initiative to share their love of trail running with the less fortunate in their communities. Flats2Mountains is an organisation that does just what its name says; it takes promising runners from the Cape Flats who may otherwise not have access to the amazing network of trails and races available in the Western Cape mountains, and supports them in pursuing their passion for running.

Their current focus is the ultimate Cape trail event, the Ultra-trail Cape Town (UTCT) , which will take place on 30 November and 1 December this year.

UTCT has established itself as one of South Africa’s premier trail running events, and has for the past two years formed part of the Ultra-trail World Tour, a recognition of the quality of the trails and the high level of organisation that the event has become known for. Large and increasing numbers of international elite runners enter the 100km race, adding to the bucket-list status that the race offers to locals.

For the second year running, UTCT is partnering with Flats2Mountains to give access to a UTCT entry to a selected group of runners. Some of these athletes are accomplished road runners who are interested in trying out trail, others have had a taste of running in the mountains and need assistance to get there regularly, acquire the necessary kit, and enter races that will develop them as athletes.

UTCT last year added a 21km option to their 35km, 65km and 100km events, which provided the Flats2Mountains crew with an ideal platform to motivate and encourage a group of runners that they identified as being deserving and in need of assistance.

Rudy Oliver from Ruytervacht was one of last year’s recipients and had only started running in 2018 when he was selected for this opportunity. Rudy successfully completed the 21km UTCT last year and has now signed up to run the 35km this year. “This is a tough sport, but it’s so good for the soul. The 21km UTCT was amazing, the vibe and the atmosphere. I learnt a lot as I ran out too fast and really suffered in the second half. I have learnt to pace myself now and I run regularly on Table Mountain.”

A group of 15 runners were entered into the 21km event through Flats2Mountains, with UTCT covering 50% of the entry fee. Mike Obery is one of the committee members of Flats2Mountains and says: “We raised the funds to cover the balance of the entry fees and with the help of sponsors like Totalsports we were able to provide kit to the runners. We have since last year formalised our structures and will soon be identifying the runners for the 21km UTCT 2019. In time we hope to partner with other events so that we have a programme running throughout the year. We provide coaching and mentorship and assistance with transport, all provided by volunteers who are passionate about sharing the joy of trail.”

Siviwe Nkombi from Mfuleni is an accomplished road runner and trail runner, having run (and won) his first trail running race in 2016. A professional road running athlete who relies on his race prize money for a living, Siviwe was assisted with a 2018 UTCT entry through Flats2Mountains and won the race in a time of 1:48. He says that the support he received from Flats2Mountains was a dream come true as he was given running gear as well as the entry: “UTCT is majestic, a spectacular race. To do UTCT is a bucket list for the year. In trail running every mountain you face is different. The road gives me speed for the trails and the trails give me strength for the road.”

Nic Bornman, RaceDirector of UTCT: “We have a Trail Fund which has an environmental and a development component, with the development aspect being to assist talented trail runners who come from previously disadvantaged backgrounds. Working with Flats2Mountains has complemented some of the work we do here and it is gratifying to see an athlete like Siviwe win the 21km, where he probably would not have entered the race without the support.”

Anyone wanting to find out more about Flats2Mountains or to offer some assistance, can contact them on flats2mountains.info@gmail.com 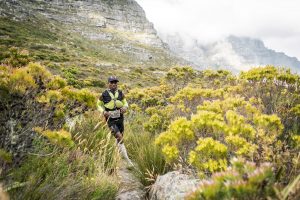 Photo caption: Siviwe Nkombi entered the Ultra-trail Cape Town 21km event with the help of Flats2Mountains, and won the race.