“Let Nature Give You A Run For Your Money”

Stage Two of the THIRSTI AFRICANX Trailrun was the source of exciting trail running on Saturday 27 March 2021 with teams battling it out on a +-32km route that boasted a total climb of 850m.

Stage One Men’s Team leaders Juan Van Deventer and Eric Ngubane from Nedbank 1 made it clear that although the overall victory was their main goal, it would also be great to win all three stages. Team Nedbank 1 claimed their second stage victory in an impressive time of 02 hours 15 minutes 55 seconds.

“The race was good. I felt in control the whole way,” says Van Deventer. “The guys started pushing quite early, but it looked like they took some strain over the last 10km, so Eric and I opened up this nice gap. The first 18km was easy, then it got quite technical while the last 5km was comfortable and easy. I think Stage Three will be difficult, the guys are bound to push. As we have a solid gap, we will be more defensive tomorrow and just sit with the guys. So far I’ve loved every second of the THIRSTI AFRICANX Trailrun and I look forward to finishing off on a high tomorrow.”

“The main thing now for us is to defend the leading time,” says Ngubane. “Today was more a mental race for me. I knew that at 18km we would have to be there with the leading pack. Until then we just sat behind them, keeping in contact. I told Juan that he needs to reach the technical sections first, and I would catch him. The last 5km I was just avoiding the cramps, but it was fine because I knew that we were almost home and then we’d be leading again going into Stage Three. The main thing for us is to win the overall race, winning the stage is a bonus. It felt amazing to come down the finish straight as the Stage Two winners, especially as this is the first time that Juan and I are running together.”

“Our race was a little more tactical today,” admits van der Merwe. “The first 18km was very controlled, so much so that there were times when we felt that we just wanted to pass runners. We believed that the last 10km of the stage would be very important especially for me as I’ve never run 32km before today. We took the lead the minute that the climb started. The route was pretty and very different to the Stage One route. It feels great to win two stages. Danette and I make a really good team, we communicate a lot and try to play to each other’s strengths.”

“We started really easy staying with the first two women’s teams until just after the second waterpoint when the climb started,” says Walley. “It felt strange to be stronger on the climb. We took it easy on the technical sections, while the end was just nice. The route suited us better. It’s weird to think that the event is nearly over. The last stage is always exciting, you want to give your all. I’m going to miss this.”

There was a shake up in the Mixed Team Category with Comrades Marathon Champion (2016) Charne Bosman and Kallie Burger (40 Strong) taking the stage win in 02 hours 40 minutes 33 seconds.

“We decided to run more aggressively today. Kallie said let’s do a tough 32km,” admits Bosman. “We went out with Nico and Natalie Sterk. After 1km we decided to run our own race. We knew the climb was coming, and it was hectic. The teams started catching us on the technical sections. I’m not used to technical sections and was climbing like a monkey. When the road opened up towards the end, I just started running 4 minutes a kilometre. I know that I can run on the road. I felt much stronger today and it was such a nice route. It felt great to cross the finish line first, we are a competitive team. Trail running is not easy, it’s much harder work on the trails than just doing a normal 32km.”

“The first 18k suited us, especially for Charne,” says Burger. “We knew we’d have to put in time on the technical sections. This is where the other teams caught us. We had to run really hard the last 6km, but our plan worked so we are happy. The THIRSTI AFRICANX is unbelievable. The organises are amazing and everything is just working perfectly. Tomorrow are strategy will be the same, the other teams will have to catch us and make up time.”

Stage Two of the THIRSTI AFRICANX Trailrun saw runners line up at the picturesque Wildekrans Wine Estate, ready for a +-32km route that boasted a total climb of 850m. The ‘Queen Stage’ with the longest distance, most climbing and most technical trails, the route included sections of Wildekrans Wine Estate, Botriver Farm, Beaumont Wine Estate and Kat Pas before finishing at the Houw Hoek Hotel.

Teams of two trail running enthusiasts (male/female/mixed) will be seen battling it out on a route varying in distances each day. Each stage will feature a different route that is guaranteed to keep things exciting while leaving runners in awe.

Iconic to the THIRSTI AFRICANX Trailrun, ALL entrants will receive an event hoodie and an exclusive finisher’s t-shirt, amongst other exciting sponsor gifts!

CHARITY SUPPORT: The THIRSTI AFRICANX Trailrun proudly supports The Timothy James Harlow Foundation (TJHF), a non-profit organisation that searches for opportunities to make a difference in the lives of individuals and communities. Runners can support the TJHF by making a donation when entering the event online. This year entrants had the opportunity to get more involved by suggesting a candidate and/or cause that they’d like the TJHF to support.

PLEASE NOTE: The event organisers are at all times adhering to Government Regulations regarding COVID-19.

THIRSTI is more than just Natural Spring Water; THIRSTI is a way of life. THIRSTI attracts a young, vibrant market with a thirst for life and authentic experiences.

THIRSTI started production at the end of 2015 with their iconic Still and Sparkling ranges. 2019 saw the release of the ultimate sports drink, ISOFIT+, and a bold THIRSTI Flavours range was added in 2020.

With its unique taste, attractive design, and a pH level of 8, THIRSTI has made massive strides in its relatively short time in the market with listings in all major retailers throughout South Africa.

THIRSTI has a strong focus on event sponsorships across multiple sporting codes and, in 2019, they became the hydration partner to both the Comrades Marathon as well as The Sharks rugby team. Adding to this, was the 2021 announcement of the ASBA Cape Epic official water partnership. 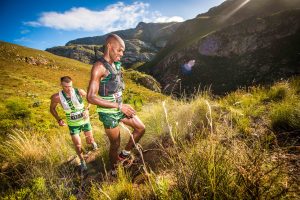 Stage One Men’s Team leaders Juan Van Deventer and Eric Ngubane from Nedbank 1 made it clear that although the overall victory was their main goal, it would also be great to win all three stages.  Team Nedbank 1 claimed their second stage victory in an impressive time of 02 hours 15 minutes 55 seconds.  Photo Credit: Tobias Ginsberg 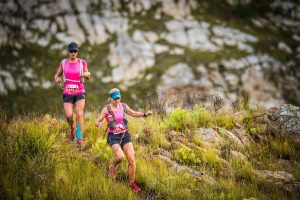 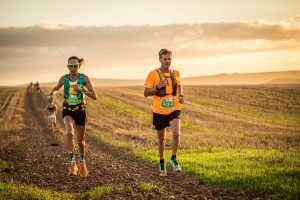 There was a shake up in the Mixed Team Category with Comrades Marathon Champion (2016) Charne Bosman and Kallie Burger (40 Strong) taking the stage win in 02 hours 40 minutes 33 seconds.  Photo Credit: Tobias Ginsberg