Records Tumble, Thanks to Reilly and Greyling, at the Discovery George MUT

Home/Latest News/Records Tumble, Thanks to Reilly and Greyling, at the Discovery George MUT
Previous

Records Tumble, Thanks to Reilly and Greyling, at the Discovery George MUT

The 60 kilometre women’s title was won by Jada Linström, while Ian Peterkin won the toughly contested men’s 42 kilometre race. Lijan van Niekerk and Anderson Ncube emerged victorious from the 25 kilometre showdown. The women’s 10 kilometre came down to just 17 seconds, as Christie Els lowered the shortest distance’s record, ahead of Micala Chevalier and Elmi Niewoudt. Rohan Kennedy was the day’s final record breaker, stopping the clock in 51 minutes and 29 seconds to win the men’s 10 kilometre.

With so many distances on offer it was an action-packed day throughout, and one where the changeable Garden Route weather showed its many faces. In the pre-dawn gloom a warm berg wind kept the temperatures near the 20 degree mark for the 100-, 60- and 42 kilometre race starts at the Witfontein Forest Station, just outside George. The 25 kilometre runners were less fortunate, starting at the summit of Outeniqua Pass in an icy wind, which whistled between the high peaks. Challenging early conditions did little to slow Reilly though. The defending champion set a blistering pace up the Cradock Pass ascent, snapped the elastic to the chasers, Roelof Mostert and Mvuyisi Gcogco.

Reilly set a tempo which kept him in contact with his course record for the first 40 kilometres. While behind Mostert fell and lost second position, on the trail, to Gcogco. The 2018 champion would complete the course, but he was unable to reel Gcogco back in and challenge for second. Up ahead Reilly was indefatigable. Over the final 20 kilometres, of the course, he upped his tempo pulling ahead of his 2021 benchmark time after passing the last checkpoint.

“Those last 10 kilometres are brutal,” he puffed having sealed the win and set a new record. “I had added motivation to finish faster this year, as I needed to get back to my wife and 4-month-old baby.”

Reilly’s fellow 60 kilometre champion, Linström was an equally dominant winner in the women’s race. Though she never threatened Taryn King’s course record. Linström ran away from her rivals early in the piece, soon finding herself along on the trail and forging on solo to a finishing time of 8 hours, 29 minutes and 6 seconds. She was joined on the women’s podium by Alana Munnik and Janeske Oosthuizen.

In the 42 kilometre, mountain marathon, the pace was frenetic from the off. Peterkin ran with the defending champion, Jacques Buys, for much of the distance. Until Buys bonked spectacularly, fading out of contention for the win and out of the podium places. Christiaan Greyling seized the opportunity and battled his way to second. Yet Peterkin was uncatchable, despite admitting to a major wobble in the closing kilometres.

“I cried about a kilometre out,” Peterkin confessed. Whether it was shock, relief or pure exhaustion which elicited the emotional response is largely irrelevant as the he stopped the clock in 4 hours, 29 minutes and 17 seconds. Greyling was second, ahead of Rikus Saayman in third, while Buys had to be content with fifth.

Landie Greyling went one position better than her husband and regained her 42 kilometre title. Having only just returned to racing at the Discovery George MUT, in 2021, following the birth of her second child she was ecstatic with her progress a year on. “It’s a great route and it was amazing to be feel stronger this time round” Greyling said. “I love running in these mountains.” She was joined on the podium by Kerry-Ann Marshall and Nadia Jooste, who both dipped under the 2021 course record.

The 25 kilometre women’s race had been expected to be one of the most fiercely contested battles within the event. With George local and 6 Peaks Fastest Known Time record holder, Rebecca Köhne, on the start line there was a clear fan favourite taking part. Sadly, for the town, Lijan van Niekerk was keen to go one better than she had managed in 2021.

“I was a little worried about my fitness coming into the Discovery George MUT this year,” Van Niekerk admitted. “I think last weekend’s race shocked me into form. I had a good run today and really enjoyed the trails.” Van Niekerk’s time for the 25 kilometre course was 3 minutes faster than her effort the year before, but still Toni McCann’s record remained intact. Köhne had to be content with second. They were joined on the podium by Lien Erasmus.

Ncube was in unstoppable form in the men’s race over the 25 kilometre distance, besting Kyle Herring by over 10 minutes. Jean Brummer joined them on the podium. Kennedy was the best part of 7 minutes up on his nearest rival, as he took 4 minutes off the 10 kilometre best time. The real tussle was in the women’s 10 kilometre though, where only 17 seconds separated the podium finishers. Els’ time of 1 hour, 11 minutes and 15 seconds was just 13 quicker than Chevalier’s, with Niewoudt a further 4 seconds back.

Once the shorter distances had concluded all the attention could shift to the 100 kilometre ultra-marathon. Arnett had distanced himself from his rivals over the first 15 kilometres and his lead was never troubled. Tarrin van Niekerk was made to work harder for her title though. Though a self-described “inkoomer” [someone who moved into the area], Lodelia Odendaal is also a popular figure in Garden Route trail running circles. Odendaal led through Checkpoints 1 to 4, but Van Niekerk was constantly on her heels.

When Odendaal began to fade the physiotherapist, Van Niekerk, forged on. Meanwhile in the men’s race Robbie Rorich had dropped from second to third as another George resident, Brandon Hulley exploited his local knowledge. The rising trail star did not have enough in his legs to challenge the experience Arnett however.

“It was awesome, though there were a couple of tough sections. Tonnelbos on 100K legs… is a bugger,” Arnett grinned, already reflecting positively on the Type II fun he just endured. “It’s hard. But otherwise, I felt super strong and am really stoked. The first time through Tierkop, after 40 kilometres, Robbie [Rorich] was right on me. The crew there said he was 3 minutes back. But I climbed well after that and I think he must have put too much in trying to catch me because the next time through Tierkop he was in third and Brandon [Hully] had moved into second.”

Arnett’s winning time was 12 hours, 40 minute and 59 seconds. Hulley was 31 minutes and 36 seconds back, while Rorich completed the maiden Discovery George MUT 100 kilometre podium. Van Niekerk ran home strong – or as strong as is possible after 14 hours, 35 minutes and 50 seconds in the mountains – to claim the inaugural women’s 100 kilometre title. Odendaal finished second, with Caro Jordaan third.

For more information and the full results from the 2022 Discovery George MUT visit www.georgemut.run. 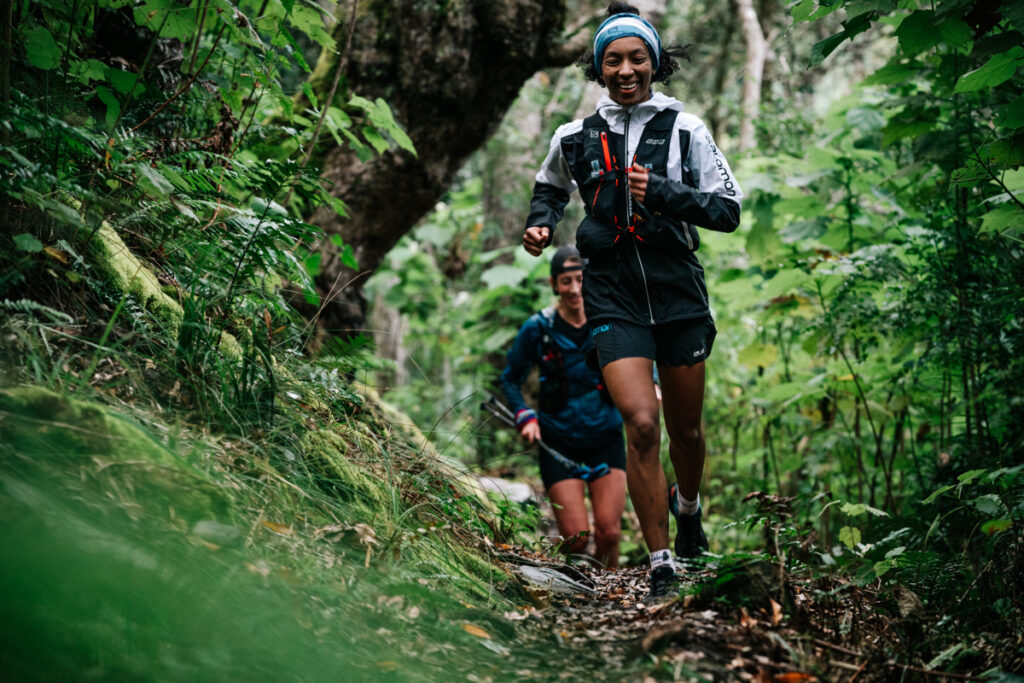 Shafeeqah Gordon was one of the many trail runners to rave about the beauty and the challenging nature of the Discovery George MUT Route. Photo by Marzelle van der Merwe. 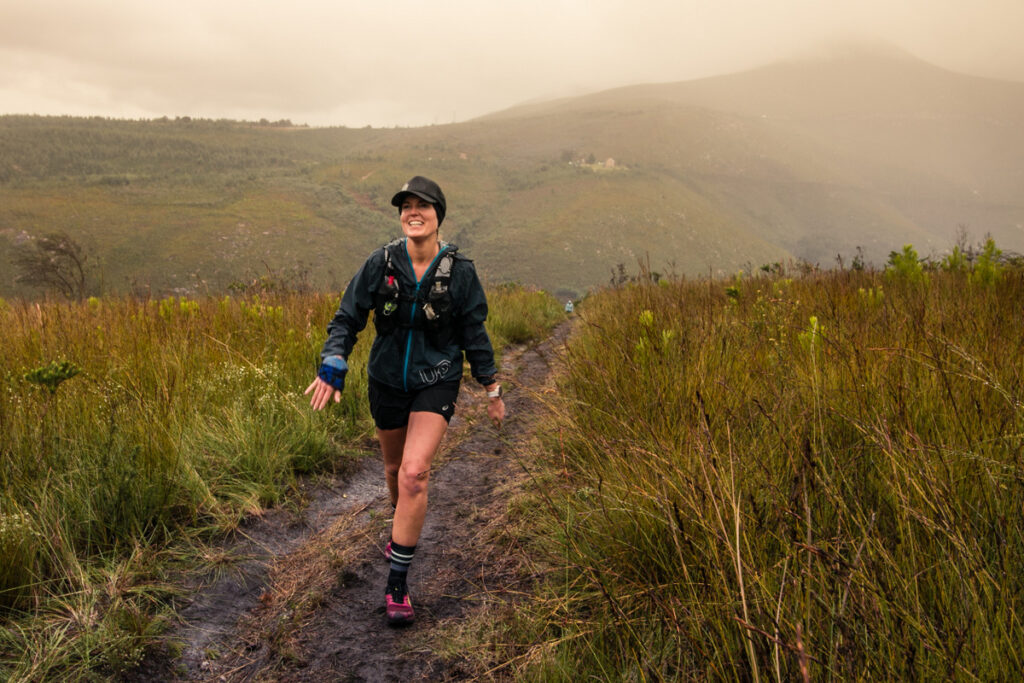 Remy Kloos, recently returned from summiting both Mount Everest and Lhotse, took part in her maiden trail run as she beings her build-up towards the final summit, Puncak Jaya, in her bid climb the highest peak on each continent. Photo by Emma Rorke. 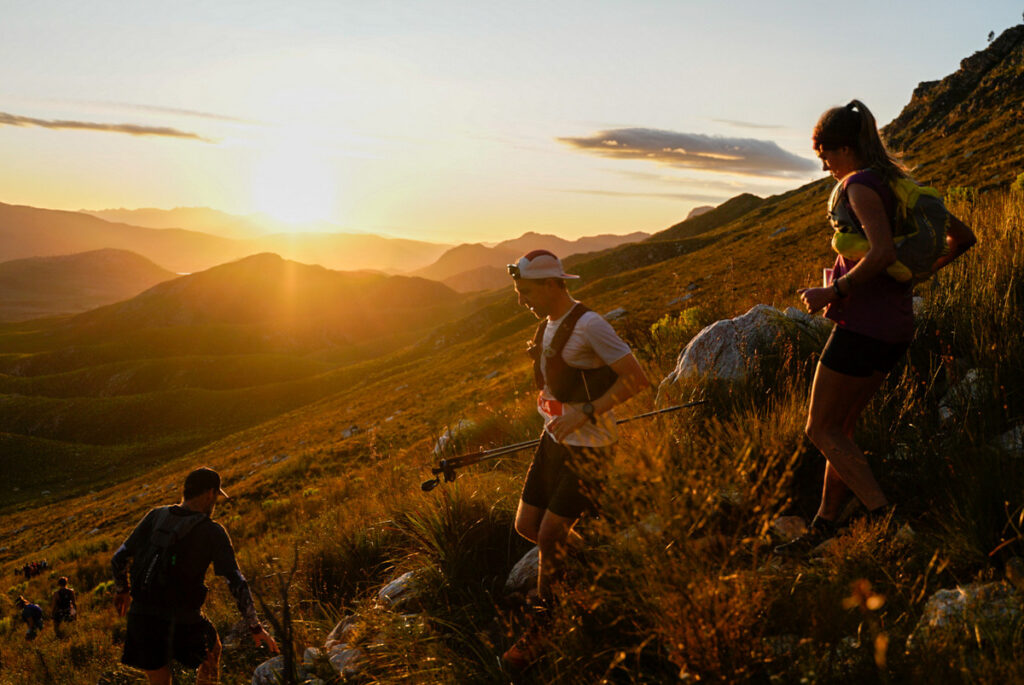 When the sun rose the majority of the longer distance fields were already on the northern slopes of the Outeniqua Mountains. Photo by Simon Pocock.