The relative newcomer played an excellent tactical game, holding back during the elimination heats on the way to the final, knowing that he would have to complete the 4,2km route with some 390m of climbing four times on the day. Conditions were perfect for running – sunny and warm but with a light southerly keeping  conditions coolish.

“I’m incredibly stoked,” a sweat-drenched Rorich beamed on the finish line. “During the elimination rounds I was counting numbers and making sure I just did enough to advance through, saving myself for the final,” he said.

The unique high intensity trail-running elimination race was the brainchild of Ryan Sandes who wanted to create a fun, innovative event where he could share the mountain with as many people as possible and formalise (without compromising its core roots, of course) #TamingTheLion, the underground time-trial up-and-back from the SanParks hut.

The race saw the top 100 men (from the Strava qualifier) evenly assigned (depending on their qualifier time) to one of four groups of 25 to run the up-and-down route once against the clock. Those who finished under the cut-off time of 38 minutes made it through to the next round. This made for super short recovery times between heats – around 10 minutes – and made for some very tactical racing during the elimination heats.

These qualifiers were then split into a top and bottom half, with the top half racing for the Elite title and the bottom half, the Plate category.

“I knew Tim is a super fast climber, so I thought ‘let me hold on to this guy’,” Rorich commented, going on to explain how he then managed to get away and hold his lead all the way to the finish.

The top 30 women also qualified based on the Strava leaderboard and it was Annamart Loubser who claimed the title in a time of 35:10 beating Toni McCann and Julika Pike. Loubser finished second in 2016 and took a step to the top of the podium this year.

“I definitely saved myself a bit during the qualifier and semifinal,” commented an elated Loubser right after the finish explaining how tactics came into play because the women’s format for 2017 added an additional heat. “We only went up-and-down twice last year, so I knew I had to keep some in the tank for the third one this year” she said.

“Conditions were good this year, better than last year (which was a bit slippery), it was hot on top, so the breeze was good,” Loubser concluded.

The men’s intermediate race was won by Lunga Nolakana in a time of 30:45, with Matt Lennon in second place. 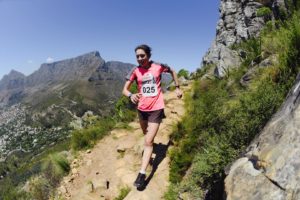