In October 2016 some of you will try to conquer the Cederberg Traverse. It will consist of a number of races, namely the 100miler (160km), 100km and a two day 100km, through the most pristine and iconic spots in the Cederberg. This sounds like a daunting challenge and might intimidate you, but listen closely…If you persist through this wonderful gift of a journey, you will discover a whole new world and a better version of yourself!
I completed the 100km Cederberg Traverse in 2015. It was my second attempt to run a 100km over mountainous terrain. The first attempt was at the Outeniqua Quest, which I did not finish. 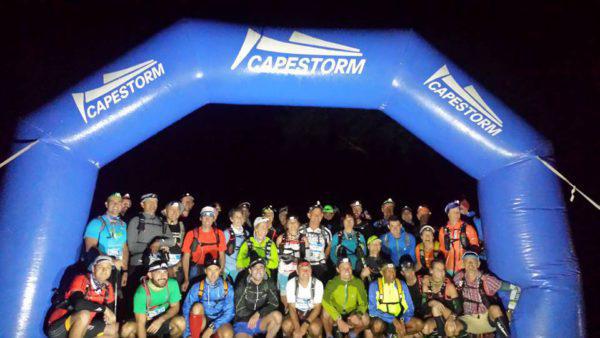 Start Group of the Cederberg Traverse 2015

The DNF left a massive 100kg monkey on my shoulder, chewing on my neck even harder to complete a 100km before the end of the year. Scouting the internet, I stumbled upon the Cederberg Traverse. My first thoughts were that it is close to Cape Town and the terrain did not seem too hectic. The only catch was that it was happening in 2 weeks.

So I entered. On entry I felt a bit intimidated, realising it is a self-navigation race and that you need to supply a CV before you can enter. I also realised that the people organising the event come from an adventure racing background and are known for including the “element of surpriseHi “. Nonetheless after I entered, I made a conscious decision and choice to pitch up at the start line and finish the 100km – NO MATTER WHAT IT TAKES.

I made it to race briefing, where the race organisers personally introduced every single runner, which quickly sparked a flare of camaraderie. Early the next morning, I woke up to cold temperatures and a camp buzzing with athletes preparing to set off on the mammoth journey.

The gun went and we were off. Straight away, we were greeted with a big climb up the Wolfberg cracks, with most of the runners summiting at first light. The setting created a feeling of being on top of the world. My adrenaline levels were high, as my senses were enriched with saturated and vibrant colours of the early morning sky.

While running to the Wolfberg Arch, reality struck that I was going to run for the next 20 hours. For any ultra-runner, that is not something that will phase him/her too much as he/she knows how to deal with the time and distance. But for a newbie, like me, it was a scary thought – one that could lead to an anxiety-attack and kill your confidence. Luckily, I got over it by reminding myself of the choice I made to finish this journey – NO MATTER WHAT. 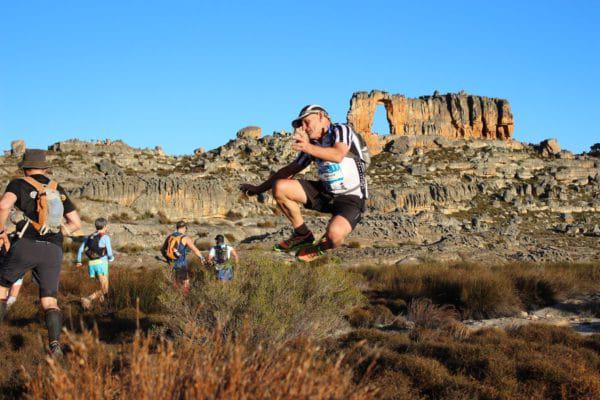 Okay, so we arrived at Driehoek (CP1) and then Sleeppad hut (CP2), which can be seen as the warm-up section of the day. Half way to Middelberg hut (CP3) the group that I was running with dropped me while going down a long technical downhill when my left ITB started flaring up. The temperatures were rising and I barely survived until reaching CP3, which was only 45km into the journey. I found some shade and rested, while having something to eat. Mentally I felt strong but physically I felt kind of shaky. After my long rest I proceeded to Algeria (CP4).

What they don’t tell you in the brochure, is that this leg is super tough! It is very technical, mostly downhill, overgrown, smack bang in the heat of the day and there is not much water around. It is that little surprise, they call a game changer.

While struggling through the elements, overcome with heat exhaustion and nausea, I soon caught up to James Robey. He seemed to be struggling more than I was and I casually passed him with an invitation to join or follow me. It was not long after that, that I found Juan Carstens sitting next to the trail, looking rather pale. He was suffering from severe heat exhaustion, dehydration, cramping and nausea. After seeing Juan, I made it my main priority to just keep my temperature down. By focusing on cooling down the kilometres went faster than expected and I eventually reached CP4, 62km.

The feeling of reaching Algeria, was like finishing. My wife, Willemien, was also there for support, which made me so glad! It gave me confidence to finish my journey. I cooled down, tried to eat something, but failed at getting anything down. By that time, I was severely dehydrated and suffering from involuntary cramping. The only way I could get a handle on the situation was by laying on my back and trying to relax. After a while Willemien encouraged me to stand up, take my stuff and make the final venture into the night. 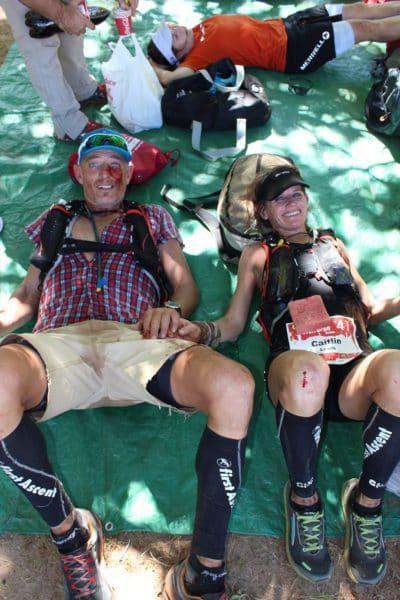 Caitlin, Cobus and Tatum regaining their strength at Algeria

Okay, so just to make it clear, if you can get to Algeria, get your stuff together and keep on moving into the night – YOU WILL FINISH THIS RACE. Once the sun sets, you will be filled with new energy, a new dimension will unfold and you will experience the Cederberg at its best.

From Algeria to Sneeuberg hut (CP5) I was walking! I walked with a stick, because my ITB was no more! As the darkness engulfed the mountains I was busy with the climb up Duiwels gat. The sky was open and billions of stars made their appearance. The valley was filled with thousands and thousands of fireflies, while the sound of rivers, animals and other insects echoed through the night. A sense of appreciation for life was filling my lungs, as I carried on.

The night was growing darker, the temperature slightly colder, the stars shined brighter, the mental battle became simpler and my aching limbs stayed the same. I finally reached CP5 after hours of walking. To be honest I was shattered, but I deeply appreciated the hot soup that was placed in my hands.

The final leg, I broke down into small 100m sections. I was running 100m and then walking 20m. It helped me to pull through and develop a rhythm. I soon passed the Maltese cross, where I ran past the photographer (NB take a break and take a photo at the Maltese cross). I was so stupid to run past, but at that stage I just wanted to finish. I reached the final downhill, which took me through hell with my very tender ITB. The steep single track eventually turned into a flat jeep track, which guided me all the way to the finish.

I finally finished in a time of 20h32min. The only people awake were the organisers, who were sitting around a camp fire, to keep warm. They welcomed me home and attended to my needs.

The relief of finishing was unreal. Just reflecting back on what you have accomplished/experienced, over the last 20+ hours, was overwhelming. Then you remember all the runners that are still busy and you conclude that you will never ever do this again, as you have promised yourself 100 times over and over during the race that you are not an ultra-runner and don’t want anything to do with ultra-running for the rest of your life.

That being said, a week after the Cederberg Traverse, I entered the 100km Salomon Skyrun. A week after completing Skyrun I entered the Addo 100 miler. Now, after completing Addo, I entered for the first ever Cederberg 100 miles. I can now say with confidence, that I am addicted to the journey of ultra-running. It is the single most rewarding experience. As Adrian Saffy always says: “You live a lifetime in a day”. The Cederberg Traverse gave me the opportunity to realise and experience this very true thing. This event has made me who I am today, it enlightened me to make that one choice, to finish NO MATTER WHAT IT TAKES.

For photos taken by the photographers, Cederberg Traverse 2015:

For more information on the Cederberg traverse: